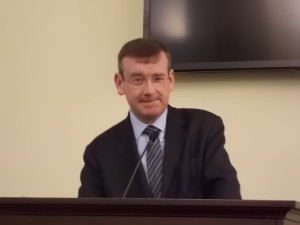 On Thursday 25th February, Francis Campbell BA, MA, gave a talk to the members of the Catholic Union at the University of Notre Dame, Suffolk Street. The topic of Catholicism in the Secular World proved to be an insightful look into how Catholicism is evolving in the UK and the world based on current events.
There were many sub-topics that were covered with Mr Campbell using the concept of Faith Schools and their importance to British culture to battle the concern of radicalisation. This comes at a very opportune time with Louise Casey’s reports on cultural differences that are being used to show the positives and negatives of secularism.
It was certainly a talk that the members found thought provoking as Mr Campbell delved back centuries to other cultural divides such as the various Enlightenments to show how reason and faith have always been linked. This was accompanied by quotes from academics and Pope Francis himself to show how identity and individuality, religious or not is vitally important to create a functioning society.
The Catholic Union would like to thank Francis Campbell for taking the time out to give this informative presentation and answer questions on a subject that is a concern not just for Catholics but the United Kingdom as a whole.
ENDS