The Craigmyle Lecture 2015 was delivered by Sir Rocco Forte. 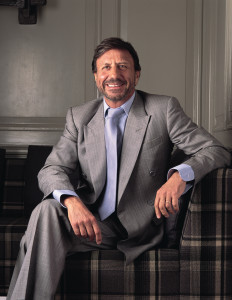 Sir Rocco Forte MA, FCA, FIoD. was educated at Downside, and Pembroke College Oxford, where he read modern language. While studying, he also won a Blue for fencing. He qualified as a Chartered Accountant in 1969 and started work in the Forte Group, taking over from his father as CEO in 1992.

Sir Rocco set up his own group of hotels in 1996, initially known as RF Hotels and re-branded as Rocco Forte Hotels. The group encompasses ten hotels in Europe, Russia, and is soon to launch into the Middle East.

Sir Rocco was knighted in December 1994 for services to the UK tourism industry. He received the highest Italian accolade, the Gran Croce dell’Ordine al Merito della Republica Italiana, for his entrepreneurial merits and strong links with Italy in 2005. He was President of the British Hospitality Association from 1991 to 1996, and a member of the Executive Committee of the World Travel & Tourism Council.

The text of the speech is here.

This website uses cookies to improve your experience while you navigate through the website. Out of these, the cookies that are categorized as necessary are stored on your browser as they are essential for the working of basic functionalities of the website. We also use third-party cookies that help us analyze and understand how you use this website. These cookies will be stored in your browser only with your consent. You also have the option to opt-out of these cookies. But opting out of some of these cookies may affect your browsing experience.
Necessary Always Enabled
Necessary cookies are absolutely essential for the website to function properly. These cookies ensure basic functionalities and security features of the website, anonymously.
Functional
Functional cookies help to perform certain functionalities like sharing the content of the website on social media platforms, collect feedbacks, and other third-party features.
Performance
Performance cookies are used to understand and analyze the key performance indexes of the website which helps in delivering a better user experience for the visitors.
Analytics
Analytical cookies are used to understand how visitors interact with the website. These cookies help provide information on metrics the number of visitors, bounce rate, traffic source, etc.
Advertisement
Advertisement cookies are used to provide visitors with relevant ads and marketing campaigns. These cookies track visitors across websites and collect information to provide customized ads.
Others
Other uncategorized cookies are those that are being analyzed and have not been classified into a category as yet.
SAVE & ACCEPT